It's sn Act of WAR by the Globalists!

Stories and Videos Highlighting Why We Need To Drain the Swamp of Globalists/Collectivists Sooner Than Later!

Sometimes you just have to have a few giggles

Time To Shut Down shut down the 'K' Street Lobbying Corruption Machine for good!

A Warning From Yugoslavia: Don't Let Socialism Come To America

This is happening right here, right now, ushered in via the "medical tyranny"
of the manufactured COVID-19 pandemic FRAUD!  WAKE UP before it's too late!


Nothing Disrupts the System Like An Inquisitive Mind!
What's going on is not about your health!

“If the politics of the Democratic Party prevail, this nation will commit suicide.”

The Kick Them All Out Project began in 2006 to promote a revolutionary voting strategy that offered a simple, practical and doable way for the American people to begin draining the stinking swamp our Congress has become.  Since the only direct power we have over Congress is the power to hire and fire at the ballot box, the KTAO Project voting strategy provided a way for us to "actually throw the bums out!"

Up until 2016 cycle the goal and voting strategy of the KTAO Project has remained the same.  In 2015 however, an unexpected WILD CARD appeared on the scene.  A  man came down an escalator in New York City who has single handedly created a new way for us to directly participate in draining the swamp and to help revive our nation all at the same time.

On June 16, 2015, Donald J. Trump threw his hat into the Presidential ring, a move that has shaken and continues to shake the foundations of the global establishment and political class!  Nobody was prepared for Trump.  Nobody had any idea how his utter contempt for political correctness and unconventional management/communication style and skills could put an abrupt stop to the destructive march towards globalization that has already been responsible for destroying much of Western culture and economic prosperity throughout the world.

Why does the KTAO Project Suddenly Appear To Have Become Partisan? 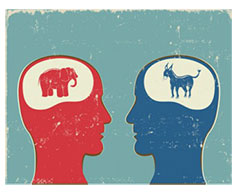 Some are surprised to see the KTAO Project suddenly advocating for one party over the other. Frankly, I was surprised as well.

I remember when Donald Trump came down that escalator to announce his candidacy. I had no idea what to think about it. As Trump proceeded to lay waste to "politics as usual" I became even more unclear about what the heck was going on.

The one thing I was clear about from the beginning was the fact that I LOVED Trump's absolute contempt for political correctness, his unconventional way of communicating and his sense of humor.

From the very beginning Trump disrupted the status quo in totally unprecedented ways. Trump entirely changed the political dynamics in the DC swamp so much so that he has opened up completely new ways to achieve the main goal of the KTAO Project which was and still is TO DRAIN THE SWAMP!

The cherry on top has been the fact that Trump, despite overwhelming negative media coverage and ruthless opposition from Democrats, has managed to fulfill a great many of his campaign promises in just his first two years in office. Promises Made - Promises Kept!

The original KTAO Project voting strategy required voters to adopt a totally dispassionate view towards voting, to adopt a purely utilitarian approach. Nothing has changed in that regard. Voting for Republicans in this upcoming election is a purely utilitarian act. The unhinged Democratic Party leadership has made it abundantly clear they have no intention of doing anything constructive or positive for the American people should they gain a majority. They have stated in no uncertain terms the only thing they are interested in doing is destroying Trump and everyone who disagrees with them.

If the Democrats keep a majority they will continue their nonstop efforts to destroy our country by orchistrating one manufactured fake crisis after another. And they will shut down every committee investigation into the crimes of Hilary Clinton and the Obama administration including what we have learned about how the Obama administration politicized/weopanized the IRS, FBI and CIA. And let's not forget about how the Democrats care more about the needs of illegal immigrants before the needs of the American people and their relentless attacks on free speech in collusion with Big Tech to censor conservative voices.

The real question you need to ask yourself now is, do you want a Constitutional Republic that guarantees fundamental unalienable rights or do you want that destroyed and replaced with Socialism/Communism/Mob Rule?  Trump has managed to force the Democrats to expose themselves for who they really are.  They have made it abundantly clear they no serious interest in defending protecting our Constitutional Republic.

What Exactly Has Changed?

In a nutshell, EVERYTHING HAS CHANGED!  When was the last time you EVER heard a U.S. President say the things Trump said in the above video?  Like NEVER?  Close to two years into his first term we now know for sure the most amazing thing about our current President is "he's not just talk."  He's a DOE.  He actually "does his best to do what he says he's going to do."  Despite being blocked, resisted and undermined at every turn, Trump has already delivered on many of his campaign promises.  PROMISES MADE.  PROMISES DELIVERED.

Both the Democratic and Republican parties did their very best to deny Trump the nomination.  They even tried to upend the Electoral College vote to try and stop him.  They've been ruthless and relentless in their efforts to undo/delegitimize/oppose/destroy Trump since he miraculously won and was inaugurated as the 45th President of the Unites States.

The Establishment Has Not Been Able To Stop The Trump Train!

Trump's absolute contempt for political correctness is one of the most endearing qualities that his supporters LOVE.  They love that he's not a politician and that he speaks like a normal person would speak.  He doesn't run everything he may say in front of focus groups before he decides what to say.

Trump is also a master at "getting under the skin of his opponents", so much so that they end up coming undone and exposing themselves for who they really are.  Virtually every single thing Democrats have done to try to stop Trump has ended up blowing up in their faces.

Trump has managed to fulfill many of his campaign promises despite the unprecedented levels of resistance from both Democrats, RINOs (Republican in name only), the DEEP STATE (career bureaucrats that infest our government) and nonstop negative press coverage which has averaged about 92%.  TRUMP JUST KEEPS ON WINNING and THEY JUST KEEP ON LOSING.

Prior To Trump There Hasn't Been Any Major Difference Between Democrats and Republicans For Quite Some Time.

Like most career politicians in this world, the majority of Democrats and Republicans in Congress have long ago sold us out to powerful transnational banking/corporate GLOBALIST INTERESTS.  Politicians who do the bidding of these globalists are guaranteed abundant funding and favorable media support necessary for reelection.  This decades-long stealthy arrangement with politicians, advancements in technology and the complicity of main stream media in covering up what the globalists have been doing has allowed them to become dangerously close to achieving their maniacal goals.

Trump has seriously hampered and in many cases utterly destroyed the momentum of globalization.  Trump's genuine "America First Agenda" has slammed the breaks on globalist efforts to destroy our country, the only thing left standing in the way of these ruthless control freaks hell-bent on imposing their tyrannical global governance/financial system on all of humanity.  Trump has exposed the FACT that both Republicans and Democrats really belonged to just one unified party, The Globalist Party, which is why any differences that may have existed between them has vanished.

Now that Trump has exposed the fact that we've really only had "one main political party pretending to be two" in control of our government, the Globalist Party, suddenly neither the Democrats or Republicans have anywhere to hide.

Both Democrats and RHINO Republicans are scrambling for their lives.  They've never been so exposed.  They are realizing that fake party politics no longer works like it used to.  Trump is forcing them all to have to decide whether or not they are going to do what's right and honor the oath they made to the American people to protect and defend the Constitution against all enemies "foreign and domestic."  Trump is forcing them all to decide which side they are on.  Are they for America, or against America?

Many RHINO Republican rats are jumping ship.  People like our worthless Speaker of the House Rat Ryan.  As the head of the Republican Party, Trump has made it very difficult for the rest of the Republicans to openly buck the America First Agenda that has already proven to be a winning formula.  This is proving hard for remaining Republicans to resist because, as we all know, the most important thing to any career politician is to "win reelection."

As for the Democrats.  Well.  What can we say?  Trump Derangement Syndrome is literally driving them insane.  The Democrats have made it abundantly clear what their choice has been.  They have declared, in no uncertain terms, that Democrats are only interested in two things.  1) Resist, oppose, disrupt and attack everything Trump Does or tries to do.  2) Push every item on the globalists agenda like especially WIDE OPEN BOARDERS and ZERO enforcement of immigration laws.

One of the most amazing things Trump has accomplished is to fully expose the Democrats for who they really are and who they have always been. One of the few things the Democrats have always been good at is manipulation by driving people into manufactured "victim groups" (Identity Politics) then pretending to be their champions.  But thankfully their divisiveness has been exposed like never before.  Many are waking up and leaving the Democratic Plantation, evidenced by the #WalkAway Movement.

Of course, a now classic example of how low the Democrats are willing to go was their last ditch effort to destroy the life of Judge Brett Kavanaugh and his family.  They turned what should have been a dignified, respectful process into a gutter circus by waiting until the hearings were essentially over to drag out a bunch of totally unsubstantiated and uncorroborated allegations of horrendous sexual misconduct when he was 17 years old "in high school" of all things.  They all said Judge Kavanaugh had no right to the presumption of innocence until proven guilty.  They attempted to hang him and his family in the Court of Public Opinion where you are guilty until proven innocent!  The Democrat position?  Guilty by mere allegation!

The Democrats Have Become An Unhinged Mob!

YOU CAN STOP THE DEMOCRATIC/SOCIALIST MOB
FROM DOING ANY MORE DAMAGE
BY VOTING IN MORE REPUBLICANS TO HELP PRESIDENT TRUMP!

The Republic vs MOB Marxism/Socialism/Globalism

Please Support Us With A Purchase